I was raised by hippies. There I said it. This most likely conjures up images of flowing skirts, long hair, a VW beetle perhaps? Yep, my mom was all that and more. (in fact I have a 1968 Beetle in my garage that belonged to my Mama :) She was an advocate for peace, made all my baby clothes and was a serious animal lover. On top of that she was cheap. My Great-Grandma raised her and her 5 siblings while her mom was working long hours as a waitress. My Great-Grandma came to Ohio from South Carolina when she was 14. She grew up on an Indian Reservation and there weren't many jobs down there. Back in the early 1900's to about the 1970's, Ohio was the rubber capital of the world. Jobs were plentiful and they paid decent wages. They offered benefits and it seemed like a great opportunity for her, as it was for so many.

(nobody is still reading, I know!)

So she brought my mom up, very frugally. All those siblings, they had to stretch things. They usually knew natural ways to clean, fertilize gardens, repel bugs, etc. She was green before there was such a thing as being green! Anyhow, I personally still feel the effects of this. Apart from laundry powder,dish soap, and comet cleanser, I don't buy commercial cleaners. I didn't grow up with them, so they're pretty foreign to me. One of the things that was always around, that I had actually forgotten about until recently, was: 20 Mule Team Borax. 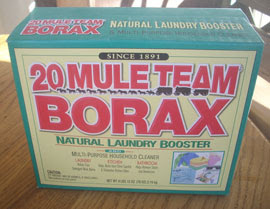 I live in a Township, in a kind of rural place so we have well water. I HATE it! I was having trouble getting my laundry really clean. I was going through 6 boxes of Arm & Hammer baking soda a month. Then it occurred to me that my Mom used something different, Borax. Even though growing up, we had city water, not well. It is a natural water softener, they mine it out of mountains apparently!

SO I went down to Wal-Mart and bought a box (they changed the old fashioned packaging, boo!! End of an era) but they didn't change anything else!

If you have never had to deal with well-water, you won't understand how awful it can be. But let me tell you, I've done 3 loads of laundry and Borax is my New (old) Best Friend. It's multi-purpose and I can't stop using it. It doesn't have any fumes and actually leaves your hands super soft. It's safe around babies, even on their clothes. It gets pet stains and smells out of anything! (I have 3 dogs, they make mistakes sometimes ha)

Obviously I'm a weirdo since I did a whole post about it, but the water situation here had me really depressed. My clothes were dingy all the time, and had a metallic smell from the minerals. All this is GONE! I know there are fancier brands than 20 Mule Team, but you don't need to pay for a name. The huge box from Wal-Mart was $3. It'll do at least 5-6 dozen loads of laundry as well as various other household tasks. I can't stand the thought of using dangerous chemicals, and this is the perfect alternative! I couldn't be happier!