This year, for the 4th, we didn't make any plans. M's job is unpredictable, so we didn't know if he was going to have to go in or not. At the last minute, we found out he didn't so, we set off in search of something to do. There's a little town called Suffield not too far from where we live. We love it there and hope to eventually buy a little farm there :) On the 4th, we found a little boat rental place on a small lake. They rent rowboats, pedalboats and ones with engines too. We opted for a rowboat, since the lake was so small. The owner was clearly a veteran (hat, shirt, tats, etc... lol) so he and M talked for a while, as vets tend to do, and he gave us a great deal on the boat for the day! 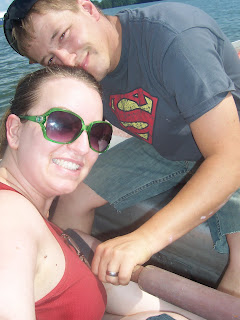 Neither of us had ever been there, and we were amazed at how pretty and peaceful it was. One side of the lake has railroad tracks running along it. While we were there a train went by, about 45 feet from us, it was right on the water, so crazy! On the other side is this building, it's called the Wingfoot Lake Hangar. The city I'm from is known for building blimps, and we have one that flys around above the city on an almost daily basis. I always wondered if other cities have them too, but I don't think very many exist. Anyway, the Hangar is like a blimp garage. 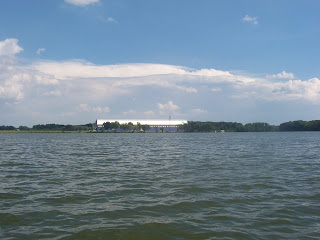 I spent most of the time reading, and slathering myself in spf 85 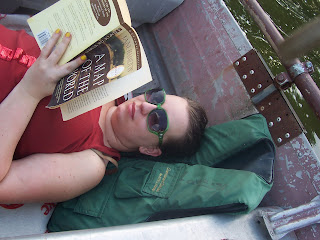 After 3 hours of no luck, M finally caught a fish! It was the only one he caught that day, and when we talked to a few other boaters, we found out nobody was having any luck. There are a few houses around the lake, and they had been shooting off fireworks intermittently, which I suspect has something to do with it! 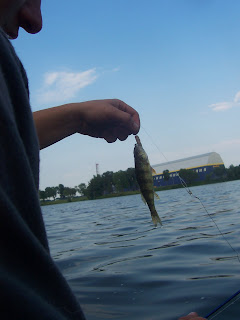 He (of course!) threw the little fish right back in 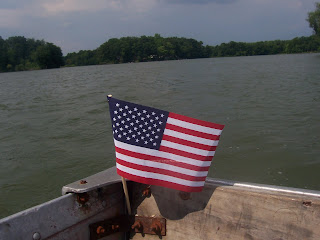 We had an awesome day, and we plan to go back to the little lake soon. Fireworks are difficult for my husband, as they are for many veterans that suffer from PTSD. I'm thankful we found an alternate activity that allowed us to enjoy the day, without the stress and anxiety we'd have otherwise.